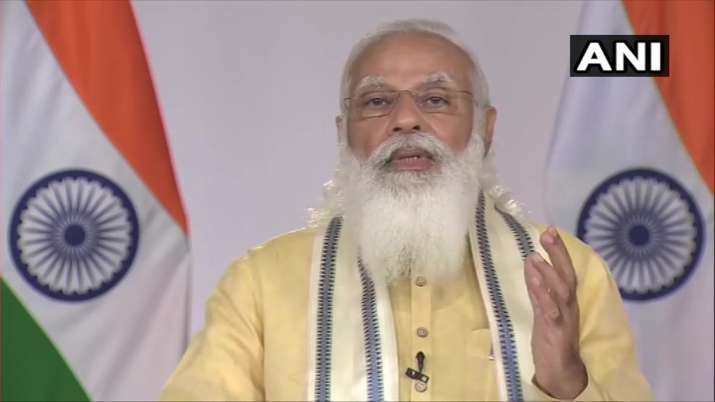 The prime minister has made similar addresses a number of times since the outbreak of the COVID-19 pandemic last year, offering suggestions to people and outlining measures his government has been taking to deal with the situation. The prime minister has often made new announcement in his address.

5:31 pm: I urge prominent people of the country to create awareness on vaccination, says PM Modi

5:30 pm: Those spreading rumours on vaccination are doing gross injustice to the poor of the country, says PM Modi

5:28 pm: Misleading people at such a juncture is not right. Many such attempts were made to fuel such doubts, says PM Modi

5:25 pm: Centre government will provide free vaccines to all states for those above 18. This will begin June 21 onward, says PM Modi

5:21 pm: It has been decided that the remaining 25% work being done by states on vaccination, will now be dealt by Centre, says PM Modi

5:17 pm: Various suggestions have been put forward. It is often asked as to why is the Central government deciding everything, says PM Modi

5:13 pm: What would have happened if our healthcare workers had not been vaccinated on priority, PM Modi asks

5:12 pm: Experts have also sensed imminent concerns for children. Two vaccines in this regard are also being worked upon, says PM Modi

5:11 pm: Vaccine supply is going to get even faster in the coming days, PM Modi

5:09 pm: We had great faith on our scientists, says PM Modi

5:07 pm: India managed to create not just one but two Made in India vaccines in a matter of an year, says PM Modi

5:06 pm: We have increased the speed and scope of vaccination manifold in a short duration of time, says PM Modi

5:06 pm: Vaccine in such times is our ‘suraksha kavach’, says PM Modi

5:02 pm: The modern world has never seen such a pandemic, says PM Modi

3:42 pm: Several parts of India have begun the process of cautiously resuming activities stopped two months ago when the coronavirus cases began its deadly surge in the second wave. The unlocking comes as Covid cases have seen a steady fall in recent weeks.

3:30 pm: Prime Minister will address the nation at 5 pm today

ALSO READ | Delhi: All above 45 years to get Covid vaccination jab at polling booths