Rohit Saraf won the hearts of millions of women when he appeared as Rishi Shekhawat in Netflix’s much loved web show Mismatched. He instantly became a household name with his charming character. The season finale of Mismatched, also starring Prajakta Kohli, ended on a cliffhanger and since the premiere of the web show last year, fans have been eagerly waiting to know more.

Seems like their wait is over. Saraf has given all his fans a glimpse of his next shoot, which seemingly happens to be the new season of the anticipated show – Mismatched 2. Just a little while ago, Rohit took to social media giving his followers a sneak peek into the upcoming season by sharing a photo. Take a look: 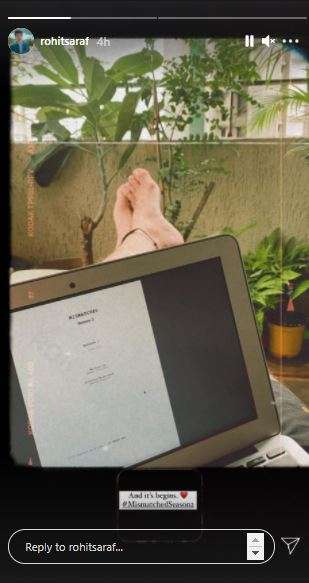 “Mismatched” is a teen romance, which revolves around Rishi, who is in search of his happily ever after, and Dimple, who dreams of being a tech wizard. Although they start off on a wrong note, the two develop a friendship over a period of time. The series is about how this perfectly imperfect couple who try to build an app.

For the unversed, Rohit is popular for his roles in Alia Bhatt and Shah Rukh Khan starter Dear Zindagi, Priyanka Chopra‘s The Sky Is Pink and Anurahg Basu’s Ludo, besides Mismatched.

He looks forward to Netflix’s upcoming series – Feels like Ishq – an anthology of six stories about the kindling of young love. The anthology brings together stories of people from different walks of life and takes them on a heart-warming journey of love. Directed by Ruchir Arun, Tahira Kashyap Khurrana, Anand Tiwari, Danish Aslam, Jaydeep Sarkar, Sachin Kundalkar and Devrath Sagar the series is set to hit the service on 23rd July, 2021.