One of the biggest Indian medal contenders at the Tokyo Olympics will be weightlifting world record holder Saikhom Mirabai Chanu. However, the 26-year-old Padma Shri awardee — who set the world record of the 49kg category in the Clean and Jerk segment with a lift of 119kg (and a total of 205kg at the 2019 World Weightlifting Championships) — could have almost left for Tokyo underprepared if not for sports ministry intervention, learnt Indiatvnews.com

The 26-year-old girl from Manipur also holds the national record in the other significant Snatch segment at 88kgs but it’s surely not her forte event, instead has been her Achilles heel.

In fact, the soft-spoken athlete, in the past, had admitted of her uneasiness with the Snatch segment as she often struggled to maintain her posture during the lift. This called for an added attention by the coaches of the Indian Weightlifting Federation.

However, two COVID-19-enforced lockdowns in a gap of a year interrupted her plans to work on her weakness with several restrictions in place including being isolated at the national camp in Patiala. Strict rules such as no heavy training, weightlifting, hours of inactivity due to prolonged isolation among others kept her away from serious training for months and severely dented her preparations.

But thanks to some quick thinking by sane heads at the sports ministry — led by Kiren Rijiju at that time — allowed her two training stints that saved her from going to Olympics underprepared, said national coach Vijay Sharma.

“The two training stints in the USA were very crucial,” Vijay told the website from Tokyo. “Unlike India, where there were several restrictions, we were allowed to train with a free mind in the USA; allowing us to work on her strengths and weaknesses including the snatch.” 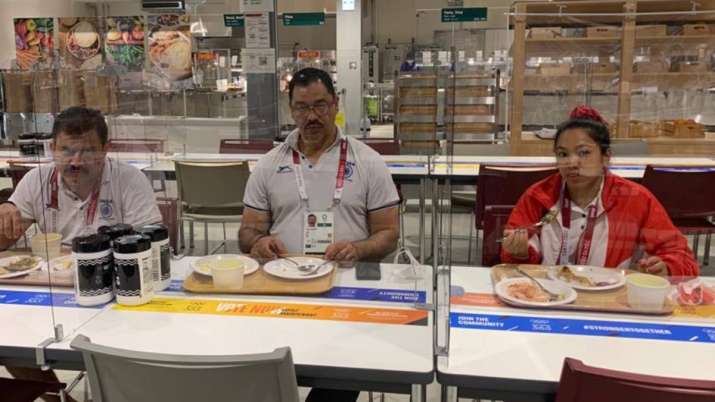 Sharma further was further thankful to the ministry for taking cognizance and sending Mirabai, along with him and his assistant Sandeep Kumar among others to the USA, right before they banned travellers from India from May 4 onwards.

“We are really thankful to the ministry for contacting us on their own and sending us by the last flight that left from India to the US.

“We got the desired time to work with an American strength and conditioning coach (Dr Aaron Horschig) during the period while also focussing on strong training of over 120 days combined. This really helped us recover and be ready in time for the Olympics,” he said.

However, Vijay stressed that foreign training is no magic and the focus will be on Mirabai’s strength at the Olympics.

“Few months of training doesn’t mean that Mirabai will excel in snatch overnight. Our focus will be on her doing personal best in Clean and Jerk and also make sure things go right in Snatch,” he concluded.

Mirabai, who reached Tokyo along with her coaches on July 16, will be vying for the medal on July 24 with the competition beginning at 6:20 am IST.