There are certain actors who leave a mark in the hearts of fans but suddenly disappear from everywhere. The recent addition to the list is the name of TV actor Rajat Tokas who rose to fame by playing lead role in popular show ‘Jodha Akbar.’ Not only this but he even played crucial roles in shows like– Dharti Ka Veer Yodha Prithviraj Chauhan, Chandra Nandini and Naagin 3. After impressing the audience with his good looks and remarkable onscreen presence, the actor was nowhere to be found. However, what caught attention was his latest Instagram post in which he could be seen lying on a hospital bed. Not only this but his caption also spoke about how a person’s life is always surrounded by stress but it depends on him how he deals with the situation.

Taking to Instagram a few days back, Rajat shared a picture of himself and wrote alongside, “Stress will always exist in life. The key is knowing how to handle it. In every situation, you always have a choice in how you respond or otherwise your body will; naturally. Just when you feel you have no time to relax, know that this is the moment you most need to make time to relax. FYI : not injured or anything serious. And absolutely nothing due to workout. hopefully will recover soon.”

Have a look at the same here:

As soon as he shared the same, his fans got worried about his condition and wondered whether he is going through depression. Many even wished him get well soon. A person wrote, “I feel either u r spreading mental helalth and relationship advices or u r literally suffering through some serious situation!” While another user wrote “Get well soon rajat..and do come back on tv with drama like prathviraj chuhan just today morning i was disscussing with my brother my fav childhood drama parthviraj chuhan.” 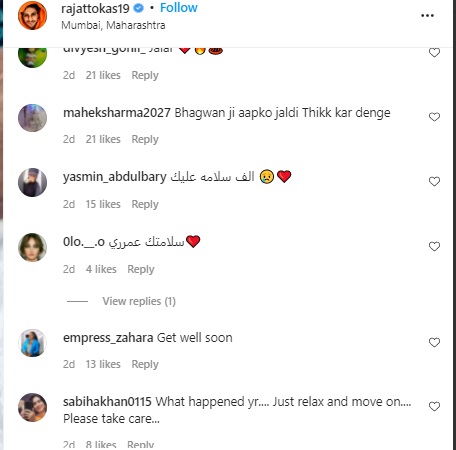 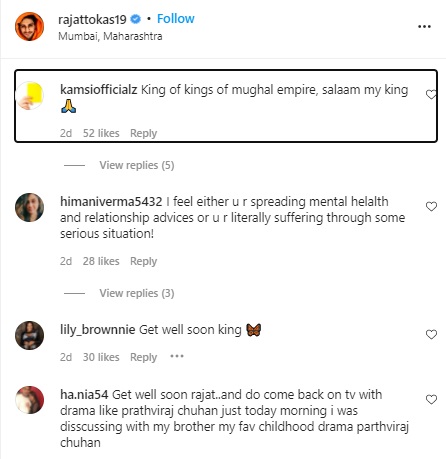 Rajat is quite active on social media and keeps on sharing updates about his life for his fans. Not only this but he also shared adorable posts for his wife. See some of them here:

Speaking about the show, it was launched in 2013 and produced by Ekta Kapoor. Starring Rajat as Akbar opposite Paridhi Sharma as Jodha Bai, the show has been dubbed in various languages like Tamil and Telugu and was also gearing up for its Bengali version. It ran for two years and enjoyed massive viewership which was evident throught the TRP list.

also read: Is Mr Bean aka Rowan Atkinson dead? This is what the internet is talking about!