Jonas Brothers got everybody laughing when they sportingly got roasted. ‘The Jonas Brothers Family Roast’ which premiered on Netflix on November 23 had multiple celebrities like Lilly Singh, John Legend among others who came on stage, said mean things about the boy band and everybody had a good time. Among the list of roasters was also global star Priyanka Chopra, who is married to the youngest Jonas Bros member, Nick Jonas.

Amid separation rumours from her American pop-singer husband Nick Jonas, Indian actress Priyanka Chopra Jonas’s latest video has left everybody in splits. Film personalities have also come forward lauding the actress for a hilarious gig. Sharing a post for PeeCee on their Instagram, actresses Taapsee Pannu and Samantha lauded the actress for the funny act. While Taapsee called Priyanka ‘#WomanGoals’, Samantha thinks the actress was amazing! 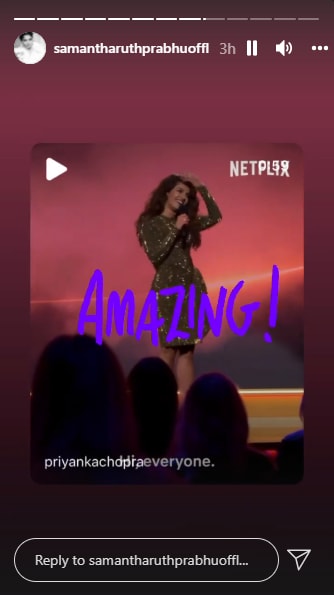 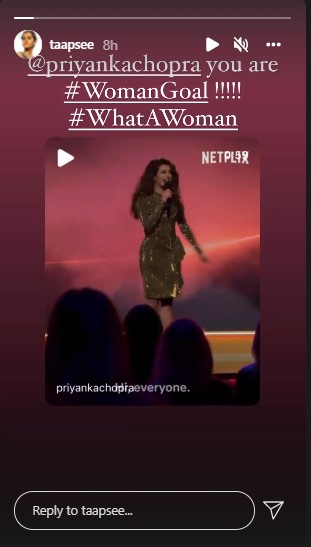 Here’s the video shared by Priyanka from the show. she captioned it as, “Brought my husband and his brothers a nice roast for dinner. Perks of being a Jonas.”

Meanwhile, Priyanka’s comment about ‘expecting’ has left her fans stunned. During a roast session from ‘The Jonas Brothers Family Roast’ Priyanka spoke about the “perks of being a Jonas” and also about having children with Nick. During her roast, the 39-year-old actress said that they are the only couple who do not have any children. Nick’s brothers Kevin Jonas has two daughters, and Joe Jonas also shares a daughter with his wife Sophie Turner.

The actress said: “We’re the only couple who doesn’t have kids.”

The next statement stunned everyone including Nick.

Priyanka said: “Which is why I’m excited to make this announcement. Nick and I are expecting…” She then hilariously added: “To get drunk tonight and sleep in tomorrow!” “Your face was really funny when I said that,” Priyanka said to Nick, who replied: “Yeah I was a bit concerned.”

Priyanka and Nick Jonas tied the knot in Rajasthan in 2018.