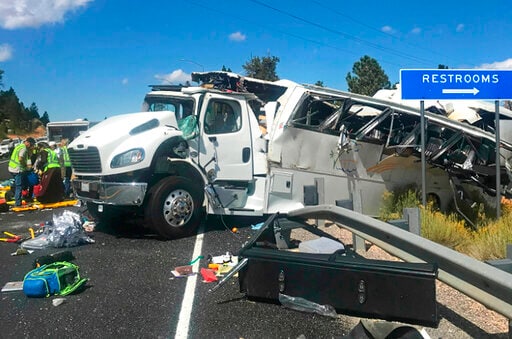 SALT LAKE CITY: Chinese tourists and their families killed or injured in a 2019 tour bus crash say in a lawsuit filed Tuesday that the states design and maintenance failed to keep a remote highway safe.

The lawsuit alleges the state failed to post warning signs, had a road design that left little room for error and included no rumble strip to warn drivers they were getting close to the edge.

More than a dozen people were thrown from the bus after the driver drifted off the road and overcorrected when he steered back, sending the bus into a rollover.

The lawsuit said the unpaved shoulder was too deep and soft, requiring the driver to steer harder to get back onto the road after passing through a too-narrow buffer zone. It had been repaved the day before, creating a dangerous contrast with the rough shoulder, the lawsuit said.

The Utah Department of Transportation declined to comment on the case filed against it and several contractors, citing its policy on pending litigation. The National Transportation Safety Board previously found highway design, signage and other characteristics were not factors in the crash.

Four people in their 60s died in the crash and several more suffered serious injuries. The group of older adults from China was on a seven-day tour operated by America Shengjia Inc., a tour bus company based in Ontario, California. The tour started in Los Angeles and was set to end in Salt Lake City.

The lawsuit seeks unspecified damages to make up for lost wages, medical bills and emotional suffering. It was first reported by KUTV in Salt Lake City.

The bus crashed a few miles from Bryce Canyon National Park, which is known for its intricately shaped red-rock spires called hoodoos.

The NTSB investigation found a lack of safety standards for bus roofs and windows contributed to the death and injury toll. Its final report, released in June, also cited inconsistent seat belt use and recommended a lane-departure warning system for commercial buses.

The report ruled out driver problems like intoxication or speeding. An earlier report had found the bus had problems starting earlier in the day, but further examination found no mechanical issues or other malfunctions, it said.

The driver had told investigators the road felt slippery, and it was newly paved at the time, but tests showed normal friction, the report found.